Bubba Wallace will be going places with Toyota next year.

The NASCAR driver and his new boss Denny Hamlin unveiled the Cup Series car they will be fielding next year under the 23XI Racing banner. The new team is co-owned by NBA legend Michael Jordan and will wear his iconic No. 23. 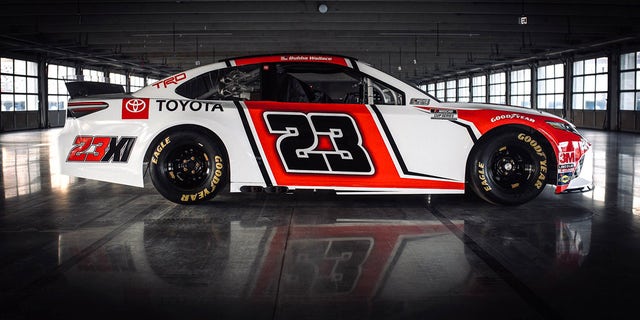 Wallace currently drives a Chevrolet for Richard Petty Motorsports, so it’s a significant switch for his career.

The red, white and black Toyota Camry was displayed without a primary sponsor, but Wallace brings several multi-year deals to the table that include Beats by Dre, Columbia Sportswear and DoorDash.

Wallace, who has not won a Cup Series race in the first four years he’s competed in the series, will finish out this season with Richard Petty Motorsports and make his debut in the new car at February’s Daytona Speedweeks.

Hamlin, 39, who will continue driving for Joe Gibbs Racing in 2021, told “CBS This Morning” that he’ll be rooting for Wallace but doesn’t see a problem competing against him because it’s “in my best interests to go out and win for myself.”