Nobody has a more stacked lineup of fantasy analysts and NFL team reporters than ESPN. It’s the rare backfield by committee that is actually a good thing for fantasy managers. Every Tuesday, we’ll ask our NFL Nation reporters a series of burning questions to help inform your waiver-wire pickups and roster decisions.

The biggest thing that stood out in Week 8: season-high rushing totals for running backs J.K. Dobbins, Zack Moss and Damien Harris — all of whom are still available in more than half of ESPN’s fantasy leagues.

But will they emerge as consistent starting options during the second half of the season? As always, our team reporters have you covered.

Dobbins has been making big plays in small doses all season long. But the rookie finally got some significant volume Sunday while starter Mark Ingram was sidelined by an ankle injury, and he delivered with 15 carries for 113 yards and one catch for eight yards.

The problem is fellow backup Gus Edwards also had 16 carries for 87 yards and a TD. And Ingram should be back in the mix soon. So while Ravens reporter Jamison Hensley does expect Dobbins’ role to keep growing, he preached caution with fantasy expectations.

Stephania Bell reports on the status of Mark Ingram’s injury and says she wouldn’t count on him playing in Week 9.

“Ravens coach John Harbaugh is big on earning the right to play more, and Dobbins has certainly done that,” Hensley said. “The second-round pick is the most explosive playmaker on the Ravens behind Lamar Jackson, averaging 6.67 yards per carry (most of any running back this year with at least 40 carries). The problem is a lead back with the Ravens doesn’t get as much work as ones on other teams. Jackson takes a chunk of the carries, and offensive coordinator Greg Roman rotates his backs frequently. Last season, Ingram only carried the ball more than 15 times twice as the Ravens’ featured back.

“So it wouldn’t be a surprise to see Dobbins emerge as the lead back. But his volume isn’t worthy of (top-tier) fantasy consideration unless his touches in the red zone increase (just three in seven games this season).”

Also worth noting: Dobbins is a risky play in Week 9 against the Indianapolis Colts‘ stifling run defense.

Moss’ role has steadily increased since he returned from a toe injury in Week 6, and he busted out with 14 carries for 81 yards and two TDs on Sunday.

Alas, much like in Baltimore, Bills reporter Marcel Louis-Jacques said the timeshare in Buffalo remains very much in play. Devin Singletary also had 14 carries for 86 yards and one catch for six yards.

“Sunday marked the first time this season that Moss actually out-snapped Singletary, although both received the same number of carries,” Louis-Jacques said. “Moss did get the lion’s share of work in the red zone, which of course is what his fantasy managers want to hear. Unfortunately for those managers, don’t expect Buffalo to crown the rookie as this team’s lead back. This still has all the makings of a hot-hand approach. And if both backs are hot, expect an even share, like we saw in Week 8. However, the fact that Moss is running much more assertively over the past two games is an encouraging sign that the game is slowing down for him.”

There might be no harder task in fantasy football than trusting a New England running back for consistent production. But Patriots reporter Mike Reiss said he would “buy in” on Damien Harris, who now has two 100-yard rushing performances in just six career games.

“He played 20 snaps, compared to 32 for Rex Burkhead and 31 for James White. But he’s the clear No. 1 traditional RB,” Reiss said of the second-year pro. “They are high on him, and I don’t see Sony Michel‘s potential return from IR affecting his usage. Plus, considering the Patriots need to run to be successful, that’s not a bad play for me.”

Speaking of White and Burkhead, the biggest fantasy surprise in New England this year might be that White has just three catches for 38 yards in the past two games. He played only 10 snaps two weeks ago.

“Maybe the biggest thing with White is that when the Patriots really focus on being more of a ground-based offense, he’s going to see his production dip a bit,” Reiss said. “This isn’t like the days when they’re spreading it out and letting it rip in the passing game. That’s when White’s production would mostly spike. They did quite a bit of two-RB packages on Sunday with Burkhead/White, just because they didn’t have a lot of other options. So White showed up in that grouping, and that probably explains his high snap count. But the ball went elsewhere, more often than not, based on the progression of the passing game.”

Last but not least in New England is second-year WR Jakobi Meyers, who has now stepped up with 10 catches for 118 yards over the past two weeks because of injuries to teammates Julian Edelman and N’Keal Harry. Meyers had just one catch all season before that.

“I’d sum it up this way: Meyers deserves to be fantasy relevant, but the Patriots’ history in these situations gives me caution,” Reiss said. “They’ve buried him in the past, even though all he seems to do is make plays. Maybe this time is different, but the past gives me some caution.”

Now for the rest of our weekly tour around the league:

It might seem silly to count on consistent fantasy production from anyone in Chicago’s passing offense, outside of Allen Robinson. But Bears reporter Jeff Dickerson gave a strong endorsement to rookie WR Darnell Mooney, who caught five passes for 69 yards and a touchdown Sunday and has at least five targets in six straight games.

“Mooney makes sense in deep leagues,” Dickerson said. “The rookie emerged as the Bears’ No. 2 wide receiver and is far more reliable than Anthony Miller.

Bears coach Matt Nagy loves Mooney. Loves him. Chicago believes Mooney is a complete player and not just a slot receiver, which is the position the Bears originally envisioned Mooney to play due to the Tulane product’s blazing 4.38 speed in the 40.

“Mooney will continue to be a fixture in the passing attack. The Bears may have a terrible offense, but they found a steal with Mooney in the fifth round. And so will fantasy managers in deep leagues.”

Hall stepped up when Golladay was hurt Sunday, finishing with four catches for 113 yards. But Hall had only three receptions all season before that. And Rothstein pointed out that the Lions relied more heavily on backup receiver Quintez Cephus instead of Hall when Golladay missed time in the first two weeks of the season.

“Cephus has been inactive when all of the receivers have been healthy, so that could be something to pay attention to. Going with Cephus or Hall is a risky play — boom or bust, in reality — from a fantasy perspective,” Rothstein said. “Your better bet might be to try and snag tight end T.J. Hockenson or starting WR Marvin Jones if they are available.”

Fantasy managers (myself included) have been a bit slow to buy into Tonyan’s breakout season. But the third-year pro caught another five passes for 79 yards Sunday — which is practically elite at the painfully thin position this year.

When asked if he belongs in that next tier of fantasy tight ends behind Travis Kelce and maybe Mark Andrews and Darren Waller, Packers reporter Rob Demovsky said, “If he can stay healthy, he probably does.”

“Injuries have slowed him down each of the last couple of years,” Demovsky said. “He looked ready to break out last year with a big catch against the Cowboys, but then he suffered a core muscle injury that he tried to play through and was ineffective. He’s been banged up a little bit this year, limping off here and there without missing any significant time. But he’s clearly gained the trust of Aaron Rodgers as his second option behind Davante Adams (at least until Allen Lazard comes back).”

Running back Clyde Edwards-Helaire had just six carries for 21 yards and three catches for 10 yards with no touchdowns in Sunday’s 35-9 rout of the hapless New York Jets. That alone shouldn’t be too concerning, because the Chiefs obviously had more success throwing the ball in that matchup (Patrick Mahomes threw for 416 yards and five touchdowns). 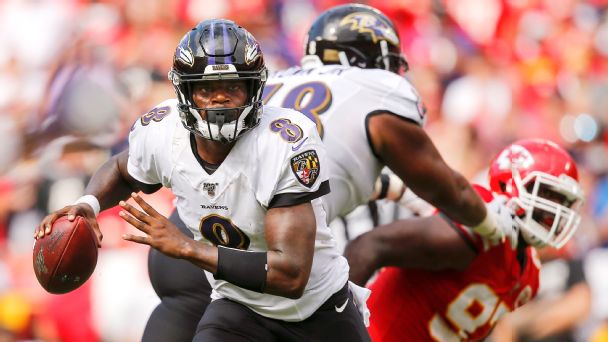 But what might be a little disconcerting for Edwards-Helaire investors is that new Chiefs RB Le’Veon Bell matched his touches with six carries for seven yards and three catches for 31 yards.

“This situation is destined to frustrate fantasy players for the rest of the season,” Chiefs reporter Adam Teicher said. “There will be weeks when the Chiefs lean heavily on Edwards-Helaire and weeks when the split is fairly even — mostly depending on the situation in any given game.

That being the case, it’s difficult to picture Edwards-Helaire being a consistent (elite) producer from a fantasy perspective.

“If you’re willing to tolerate the inevitable down weeks in exchange for the occasional big score, I’d stick with him. If not, it might be time to put him on the bench,” Teicher said.

Credit Titans reporter Turron Davenport for alerting folks back in the preseason that Davis still belonged on the fantasy radar in deeper leagues. But Davenport also stressed that people shouldn’t get too excited by Davis’ 128 yards and a touchdown on eight catches Sunday.

Matthew Berry buys Corey Davis as a viable fantasy asset, but questions his productivity week in and week out.

“That’s the second-best game of his career,” Davenport said. “But Davis should still remain a Plan B option for managers who have a top receiver on a bye week. The high risk/high reward situation isn’t Davis’ fault. When he’s targeted, he makes plays. The problem is the Titans have a different player step up each week, so it’s hard for anyone to consistently be highly productive.”